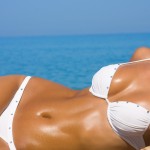 Thinking about a tummy tuck to get rid of sagging skin and excess fatty tissue or the bulge in your abdomen after pregnancy? It may offer more benefits than you imagine: A new pilot study from researchers in Alameda, Calif., shows that many women who undergo tummy tucks frequently also experience lasting weight loss, which may be due to patients feeling less hungry throughout the day.

The study looked at 20 female patients who had an average of five pounds of tissue removed during their procedures and found that those who had body mass index (BMI) measurements of 24.5 or more prior to surgery had weight loss beyond the amount of tissue that was removed even at one year following their procedures.

Patients with BMIs below 24.5 tended not to have sustained weight loss at one year after surgery. (For reference, a BMI between 18.5 and 25 is considered normal; BMIs between 25 and 30 are considered overweight; and BMIs over 30 are categorized as obese.) Sustained weight loss was also greater for women who had greater amounts of tissue removed during their procedures.

The researchers think the sustained weight loss that patients experience may be due to hormonal changes that might be occurring when fatty tissue is removed. Fat cells secrete specific hormones that can actually increase appetite; the researchers hypothesize that removing some fat cells from the body means the amount of hunger-inducing hormones are being decreased, and that’s why patients report feeling less hungry throughout the day.

About 75% of the study’s patients said they weren’t as hungry during the day as they had been prior to surgery, and that they felt fuller longer after eating meals. That’s just a hypothesis, though, and the researchers note that more study is necessary to confirm the theory.

If future studies replicate these results, abdominoplasty would offer patients who are seeking to lose weight a significant advantage over gastric bypass and other bariatric surgeries, which generally are recommended only for truly obese patients with BMIs of 40 or greater. By contrast, abdominoplasty does not have those restrictions, and so this procedure would be available to a far larger population. Considering the serious health risks associated with being overweight, a tummy tuck could help men and women achieve healthier weight levels when diet and exercise have failed. Tummy tuck before and after gallery will be an evidence of Dr. Krau’s exceptional work.

Another option for you to consider before you decide to have surgery is liposuction. We highly suggest calling our office or filling out the contact form if you would like help figuring out which procedures would be best for you.